If anybody tells you that painting a baby mural, especially a large one for a Sesame Street nursery theme with lots of characters is easy; please know that they are exaggerating or oversimplifying. I had read DIY articles that indicated that designing and completing such a painting project was easy, a piece of a cake, a virtual walk in the park and to them I would now say; NOT!

I wanted a Sesame Street themed room for the baby but I didn't want it to be like every other one I had seen with the same crib set and design. 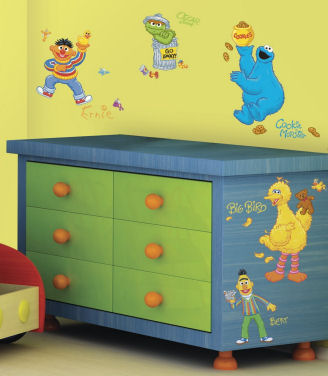 The reason that we decided to decorate the baby's room in a Sesame Street theme is because it took us back to a memorable time when we were kids. We wanted to share those fun, carefree moments with our children but we wanted something unique and original. So, what better way to achieve that than with a one-of-a-kind Sesame Street nursery mural on the walls?

One of the Most Unique Baby Nursery Themes

We are big on taking the do-it-yourself approach to home decorating projects so we thought we could manage this custom wall painting design with no problem! To be fair, it did turn out to be a very cute mural with the primary colors, painted alphabet letters and numbers and it made us glad that we chose a Sesame Street nursery theme for our little boy's room but I refuse to say that it was "easy-peasy because it wasn't; it took planning and hard work.

We started to paint half of the room a serene light sky blue color with fluffy white painted clouds in the sky. Then we used a jungle green paint color to paint the grass on the lower portion of the nursery wall.

Rather than try to draw Big Bird, Oscar and any other designs free hand, I borrowed a projector to help me draw the Sesame Street characters, Big Bird and Oscar, on the walls. Using the projector for accuracy we traced the outlines for our favorite characters on the dark green and light blue background that we had already painted and that had been allowed to dry completely.

Once the outlines were drawn, I bought paint in the appropriate colors to paint the large characters. We used acrylic paint that we bought at the Hobby Lobby. The brushes that we used to pain the Street Nursery Theme Nursery Mural were an outliner, an angle brush, and a round brush.

While we were there we picked up some cute decorations to add to the Sesame Street nursery theme in the shapes of flowers and animals to make the mural more three dimensional. They did a lot to add color as well as texture to the overall design, plus they filled areas so that we didn't have to draw more characters.


We are so proud of our baby's Sesame Street mural. It blends perfectly with the Sesame Street baby bedding and everybody loves it. It should last at least until our baby goes through the toddler stage and maybe until preschool.

Painting a whole wall mural isn't that difficult a task, it's just very time consuming. In the end it was all worth it. Our baby boy loves all the bright colors. When he wakes up in the morning he wakes up with a sunny smile and I have to believe that it has something to do with the bright and cheerful custom nursery mural that his dad and I painted ourselves.

The mural has added so much to the look of our baby's nursery that I recommend anyone to jump in and paint one for their child's bedroom.

Thanks for sharing your Sesame Street nursery ideas with moms and dads that visit Unique Baby Gear Ideas, Susana!